Learn the entire chapter of Daniel 9 in Hebrew – One of the most dramatic prophecies in the Bible! Deepen your understanding of The Word of God. Biblical Hebrew text with complete transliteration and translation into English. Details below…

*Image and price will update according to your choice below. Blurred text/watermark is for display only and does not show on the actual product!

Learn the entire chapter of Daniel 9 in Hebrew! This poster features the biblical Hebrew text of the entire chapter of Daniel 9, with each Hebrew word broken into syllables, transliterated and translated into English. Therefore, with minimal effort, you will be able to recite these verses in Hebrew and gain a deeper understanding of the Word of God.

The chapter of Daniel 9 includes one of the most important and dramatic prophecies in the Bible. This prophecy foresees the exact time of the coming of the Messiah as well as what will happen to Him. Starting with a short background and the timing in which this prophecy is given to Daniel (verses 1-2), the chapter goes on to Daniel’s confession of sin and his plea for mercy for the nation of Israel and the Jewish People (verses 3-19). The angel Gabriel then appears to Daniel, corrects Daniel’s assumption of when the Messianic Kingdom would be set up, and present’s him with God’s revelation of a timetable for the actual coming of the Messiah (verses 20-23).

Below is a breakdown of the last few verses which holds the actual prophecy:

Daniel receives the prophecy known as “The Seventy Weeks of Daniel”, although the real meaning here is Seventy Sevens of YEARS and not “weeks”. Therefore, this means 70×7=490 years are decreed over the Jewish people and over the holy city of Jerusalem for the accomplishment of the final restoration of Israel and the establishment of Messiah’s kingdom. By the end of this period five purposes will be completed:

A decree to rebuild Jerusalem will be the starting point of this 490-year period. Therefore,  by the year 444-445 BC (see Nehemiah 2:1-8), the countdown of the 490 years had begun. Furthermore, this period of 490 years will be divided into three parts:

The third part of the 490 years, will be a period of 7 more years. According to the prophecy, this period will only come AFTER the following things will happen:

The prophecy concludes with details for the last 7-year period. These 7 years are YET to come in the FUTURE:

At the end of this period the age of righteousness will be brought in. The most holy place will be anointed and every vision and prophecy be fulfilled. At this point the messianic kingdom for which the prophet Daniel yearned will finally be set up. Obviously, the messianic kingdom requires the Messiah to rule as king, which means the Messiah will come AGAIN at the end of this period. The Messiah will be killed after his FIRST coming. Yet, he would be alive at his SECOND coming. So this implies that the Messiah would be resurrected from the dead after he was killed.

So, if Daniel was right, then Messiah came and died BEFORE 70 AD!

If Daniel was right, then the Messiah MUST be Yeshua-Jesus of Nazareth!

If Daniel was right, Yeshua WILL return to set up the Messianic Kingdom!

Hebrew is read from RIGHT-to-left, so you will start from the right and work your way towards the left.
Under each Hebrew word, you will find its transliteration & translation in English. The forward-slash (“/”) separates between syllables and the capitals mark where the accent should be. Pronounce each syllable on its own (left-to-right), then combine the syllables to pronounce the word as a whole. To make sure you are pronouncing correctly, get my Hebrew Pronunciation Chart or watch the free video below… 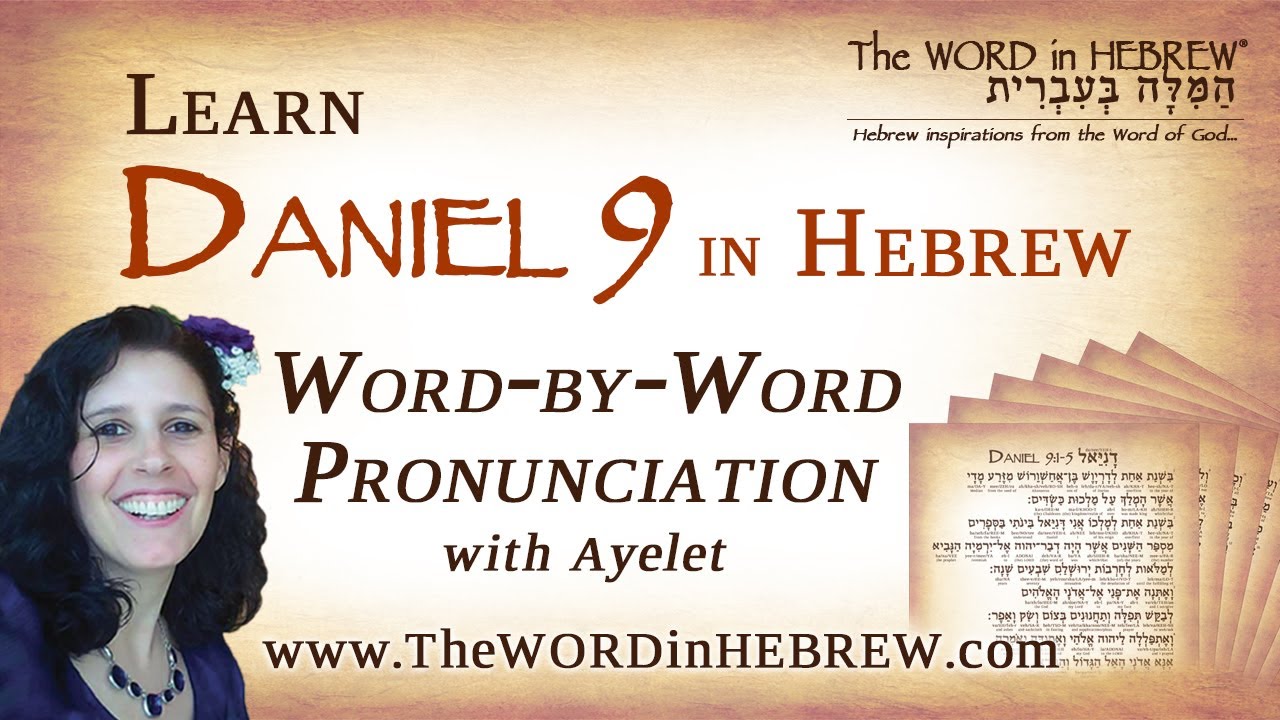 Visit The WORD in HEBREW YouTube Channel for many more video tutorials.

© Copyright 2022 The WORD in HEBREW. All Rights Reserved. For personal use only, not to be copied, distributed, altered, or sold.